THE HISTORY OF THE
ISLAND MYSSJÖ

Myssjö is one of two islands in Lake Yngern that are inhabited and have been so since the 17th century. The island of Myssjö was originally a croft under Sjunda sätesgård. The croft is included in the land register for 1653 and is there called Öen or Öön. Three people were then registered as living on the island.

There are few maps of Sjunda, which may be because the land has been unchanged and owned by noble families. From 1903 the crofters changed to become kronotorpers. The goal was now no longer to establish agriculture. Instead, chronotorp would primarily be leased to local forest workers.

During the Second World War, there was a great need for forest products such as firewood, timber and coal, and it was important for the Land Administration to have access to labour. New lessees therefore had to undertake to work for the lessor at least 75 days per year. The domain authority, on the other hand, would be responsible for new construction and refurbishment of residential buildings and commercial buildings. No rental fee had to be paid until the buildings were refurbished or newly built.

The lessee had the right to hunt small game within the area of ​​the chronotorp, but was not allowed to hunt moose. Domestic fishing was allowed in designated watercourses. Large quantities of crayfish were caught around the islands in southern Yngern and sold in Stockholm. For the chronotorper, it was an important recurring income during the year. After the crayfish plague of the 1920s, the river crayfish has been replaced by the signal crayfish.

The children who lived at Myssjö had about 7 kilometers of single road between home and school. There were long days, with no school bus, street lamps or, for that matter, flashlights to light the way.

In 1973, the open arable land that had existed on the island for a long time was replanted. The croft was then rented out to those interested in fishing or hunting.

Since 2018, Sandra Vesterdahl and Mattias Vegis own the only property on the island. The business Myssjö gård started up in the spring of 2021. Read more about us 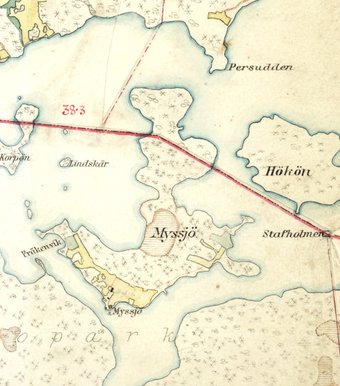 The district economic map from around 1900, taken from the Lantmäteriet's historical map archive.. Myssjö is marked with the houses, fields, meadows, forest and bog that were on the island.